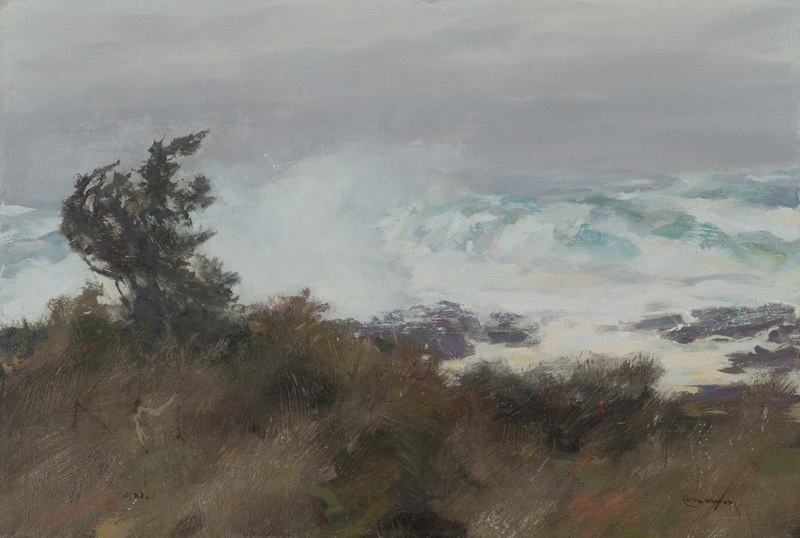 It is a lifetime study, the sea, and whenever I think I know something about painting it, I go down to the ocean where Nature makes me feel properly humble.

While Jay Hall Connaway began his life thousands of miles away from the ocean, it was an ever-present force throughout his career.  Connaway was drawn to the rugged, untamed landscape of the Maine coastline and devoted much of his life to capturing the rocky ledges and raging surf surrounding Monhegan Island, a tiny fishing community twelve miles off the coastline.  He lived there with his family year-round for nearly twenty years, reveling in the isolation and often harsh winter seasons. Over the course of his career, his powerful Monhegan land and seascapes earned him nearly 90 unsolicited one-man shows; a figure unmatched by any of his contemporaries.

Monhegan Island had developed as an artist community in the late years of the 19th century as painters were lured in by its majestic headlands and dramatic cliffs.  Summer found the island brimming with activity, and Monhegan became a center of new ideas in the arts.  By the early 20th century, the island had witnessed the rise of Modernism as Robert Henri, George Bellows and other members of “The Eight” drifted away from Impressionism and headed in the direction of a new Realism.  When Connaway moved into his Horn Hill studio in 1931, he joined a long heritage of artists including this Henri Circle, William Trost  Richards, Alfred Bricher, Rockwell Kent, Jamie Wyeth, and many other past and future painters.

Often compared to Winslow Homer and described as one of the finest marine painters of the 20th century, Connaway was unmatched in his dedication to the sea.  He had been a student of William Merritt Chase at the Art Students League, and received a charity gift in 1922 from Robert Macbeth of Macbeth Gallery along with artists Paul Dougherty, Emil Carlsen and Frederick Waugh, funding him to paint on Head Harbor Island in Maine. Connaway painted and lived as a hermit on the island for three years, feeling that “…to paint a wave, one must know how a wave breaks.”1 He settled on Monhegan in 1931, where he spent the majority of his career, and eventually relocated to Dorset, Vermont, continuing to visit the island each fall.  Connaway’s seascapes and landscapes of both Dorset and Monhegan became regular additions to Vose Galleries’ shows, and the gallery continued a relationship with his wife and daughter long after Connaway’s death.