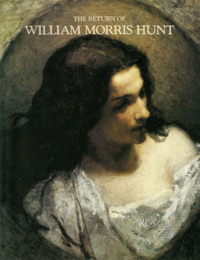 The Return of William Morris Hunt

One of the most prominent artistic forces in Boston during the mid-19th century, William Morris Hunt influenced generations of younger artists through his teaching and writings, while his unwavering enthusiasm for the Barbizon movement greatly impacted many of the city’s private and public art collections.

Born in Brattleboro, Vermont, Hunt entered Harvard in 1840 before pursuing his art studies in earnest during an eleven year stay in Europe beginning in 1843. He first trained in sculpture at the Dusseldorf Academy before studying painting at the Paris atelier of Thomas Couture (1815-1879), whose fluid brushwork and use of color and light to model forms profoundly shaped the manner of Hunt’s work. In the early 1850s, Hunt befriended the most influential of his mentors, Jean-Francois Millet (1814-1875), while exploring the Barbizon region of France, and was immediately taken with the master’s paintings of humble farmers and milkmaids laboring in the countryside, rendered with earthy colors reminiscent of Nature’s palette. His passion ignited, Hunt acquired an impressive personal collection of Barbizon paintings, while his own landscapes and figural work adopted this new French style. He exhibited in Paris and also sent work home to the Boston Athenaeum and the National Academy in New York, where, regrettably, the American audiences weren’t as receptive. Hunt persevered, and after his return to America in 1855, continued to advocate for the Barbizon painters through his connections with Boston’s elite social circles and his friendship with fellow Barbizon devotee, gallerist Seth M. Vose (1831-1910), the second generation to run the family firm. Despite years of financial struggle and derision from critics, their combined efforts proved instrumental in bringing the works of Corot, Daubigny, Rousseau and others into prominent New England collections.

Hunt taught and completed portrait commissions while based in Newport, Rhode Island, before moving to Boston permanently in 1862. He went abroad again in the mid-1860s, this time accompanied by his wife and children on a two-year tour, with stays in Paris, England, Belgium, Holland and finally Italy. The artist was back in Boston by June of 1868 and taught art classes for women for two years before handing the reins over to his pupil, Helen Knowlton, while still offering words of advice during regular critiques. Knowlton’s notes taken during Hunt’s visits turned into the book Talks on Art, first published in 1875 and still enjoyed today for his candid remarks on the subject.

Hunt’s career flourished since his 1855 Boston debut, but the early 1870s marked a time of misfortune both professionally and personally. He lost much of his life’s work and personal collection of French Barbizon paintings in the Great Boston Fire of 1872, and after years of marital discord, was separated from his wife and children in 1873. Despite these hardships, Hunt found solace in his work, taking on more portrait commissions and visiting Florida, Cuba and Mexico where sketching landscapes out-of doors offered him much needed rejuvenation. Reviews of his impressionist paintings from this period were divided, with those of the Pre-Raphaelite camp deriding the sketch-like quality while others admired his daring use of color and light to capture atmosphere and form. He also journeyed to Niagara Falls, working in oil, pastel and charcoal to capture the grandeur of a subject that had intrigued artists for generations, and several of his Niagara paintings are now in museum collections.

In December of 1878, Hunt put the finishing touches on a pair of murals commissioned for the Albany State House, and, feeling physically and mentally exhausted by the project, spent most of 1879 traveling. He passed several weeks of that summer at Celia Thaxter’s cottage on the island of Appledore in the Isles of Shoals off New Hampshire, where on September 8 he was found drowned in a small pond near the home, fully dressed for his morning walk. Many have debated whether the artist took his own life, but what remains certain is the impact his work and his teaching had on painters from his own time and which continues to this day. In November 1879, the Museum of Fine Arts, Boston, held a memorial exhibition of his paintings, followed in 1924 by a second exhibition on the centennial of his birth and a third in 1979 on the centennial of his death.