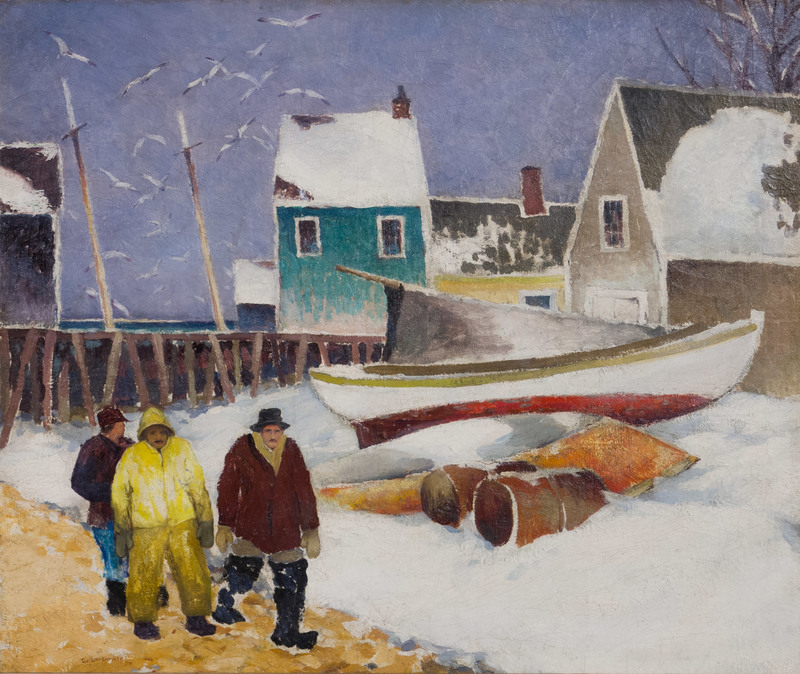 Born in Pennsylvania to photographer and painter Arlington Nelson Lindenmuth, Tod Lindenmuth began his own artistic education under Robert Henri at the New York School of Art and also studied in Provincetown with E. Ambrose Webster and George Elmer Browne. He first exhibited in Provincetown in 1915, showing a group of his woodcuts, and his talents would come in handy when he designed catalogue covers for the 1916 and 1917 annual exhibitions of the Provincetown Art Association (PAA), of which he was a member. Founded in 1914 with the goal of collecting and promoting work by local artists, the PAA would eventually experience a rift between traditional and modern painters, and from 1927 to 1937 two separate “Regular” and “Modern” shows were organized to placate both factions. Lindenmuth studied with more conservative members like Browne and Webster, yet he easily mingled with the avant-garde sect and joined his friend Ross Moffett in bridging the gap; by 1938, the PAA’s Board of Honorary Trustees became a more representative group of the range of styles found throughout Provincetown and once again the “Regulars” and “Moderns” exhibited together.

In 1925, Lindenmuth married fellow painter and illustrator Elizabeth Boardman Warren, whom he had met in Provincetown, and they remained dedicated members of the town’s art community, maintaining a home on Commercial Street with a gallery in the front room. Beginning in 1934, the Lindenmuths opened a winter studio in St. Augustine, Florida, and in 1940 they decided to begin spending the warmer months in Rockport, Massachusetts. Like many painters working at the colonies along both Cape Ann and Cape Cod, Lindenmuth was fascinated and inspired by the hardy year-round residents of Massachusetts’ coastal communities, especially the fishermen working along the docks no matter the weather or strolling along village streets under gray winter skies. In addition to the PAA, Lindenmuth exhibited with the Society of Independent Artists, the Rockport Art Association, the Art Institute of Chicago and the Pennsylvania Academy of the Fine Arts (PAFA).