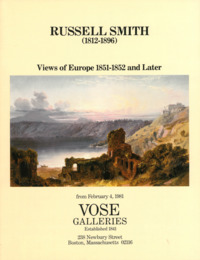 Known for their exquisitely rendered landscape paintings, Russell Smith and his son Xanthus (1839-1929) remain firmly established among esteemed artists of the nineteenth century. Smith emigrated with his family from Glasgow, Scotland, in 1819, settling in Pittsburgh, Pennsylvania, at the age of seven. In 1828, he began his formal artistic training under portraitist James Reid Lambdin (1807-1889) and then pursued the arts independently just three years later. He began a longstanding career as a stage set painter and became well-known for his naturalistic scenery, working for theatres from Georgia to Boston until he reached the age of eighty.

After his marriage to floral painter Mary Priscilla Wilson, however, Smith began to focus on painting landscapes of Pennsylvania and even New England and Europe. He spent several summers during the 1840s sketching and painting in New Hampshire’s White Mountains. Smith became extremely active in the local arts and exhibited these personal oils and watercolors at the Pennsylvania Academy and the Artists’ Fund Society of Philadelphia, befriending Thomas Birch, Joshua Shaw and John Neagle through these associations. Rembrandt Peale was also among his companions and wrote to an art collector that Smith was a “…most industrious artist, whose landscapes please me chiefly because of their having truth, nature, and Americanism in them.” [1]

Always an astute observer of the natural world, Smith ingeniously combined topographical accuracy with painterly brushwork in his oils, creating literal yet artistically rendered depictions of his surroundings. His interests in science and geology greatly contributed to this scientific realism; Smith was even employed by a number of eminent geologists to illustrate their lectures and record books of their expeditions. After the loss of his wife and daughter in the 1870s, Smith moved in with his son, Xanthus, who was also an artist. Although his style was considered old fashioned, Russell Smith continued to paint for the sheer joy of it and regularly sold works through local dealers. He died at Edgehill, his son’s family home outside of Philadelphia, in 1896.

[1] The quote is from a letter by Rembrandt Peale to Robert Gilmore, June 21, 1839, collection of Robert D. Schwarz, Philadelphia, as quoted in Robert Wilson Torchia, The Smiths: A Family of Philadelphia Artists (Philadelphia, PA: The Schwarz Gallery, 1999), unp. note.