Carved from Darkness, Carved from Light, A Selection of Works on Paper 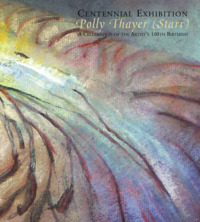 Centennial Exhibition: A Celebration of the Artist's 100th Birthday 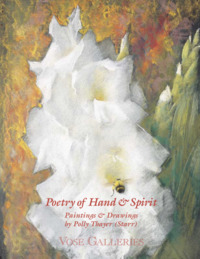 Poetry of Hand and Spirit

Polly Thayer Starr enjoyed the reputation of being one of Boston’s most cherished and long-lived treasures.  For more than seven decades she produced artwork that traversed many worlds, from the traditional technique that characterizes the best of the Boston School painters to experimentation with modernist ideas.  As a young artist, Thayer and her husband, Boston lawyer Donald Starr, often attended painting weekends with a group that included “Charley” Hopkinson, unofficial leader of “The Five.”  Lively discussions about new ideas flooding the art world marked these outings, held at Hopkinson’s home in Sharksmouth on the North Shore or at Edward Forbes’ beach home on Naushon Island off the coast of Martha’s Vineyard.

Born Ethel Randolph Thayer in 1904, Polly, as she was called all her life, grew up in the Back Bay neighborhood of Boston and began taking private drawing lessons when just in grade school. At nineteen, she entered the Museum School, studying under Philip Hale and Leslie Prince Thompson, and later took private lessons with Hale where she mastered the conventions of academic painting.  Her desire to learn more about composition and color theory led her to Provincetown where she rented a small cottage with a friend and studied at Charles Hawthorne’s summer school.  Thayer also traveled extensively, to Paris where she studied at the Académie Colarossi, and to Italy and Morocco and eventually Madrid. Upon her return to the States, she spent winters in New York and had her first solo exhibition at Doll & Richards Gallery in Boston in 1930. The show resulted in numerous portrait commissions and one year later, she presented several of her portraits at Wildenstein Gallery in New York. In 1932, Thayer rented a studio at the Fenway Studio building in Boston, establishing herself as a portrait artist.  Always eager to learn more, she decided to take a class with Harry Wickey at the Art Students League and experienced a breakthrough in her understanding of form and space which would translate into her work from that moment on.

Thayer has been honored in over twenty one-person exhibitions in such prestigious galleries as Wildenstein in New York, and Doll & Richards and Vose Galleries in Boston.  Her work is included in twenty public collections including the Museum of Fine Arts in Boston and Springfield, Massachusetts, the Pennsylvania Academy of the Fine Arts, the Fogg Art Museum at Harvard University, the New Britain Museum of American Art in Connecticut, and the DeCordova Museum and Sculpture Park in Lincoln, Massachusetts. Vose Galleries has organized several exhibitions of Polly’s work since reestablishing the gallery’s contemporary division in 2001, and Polly was the only living artist included in the Museum of Fine Arts’ 2001 exhibition A Studio of Her Own, celebrating the many successful women artists active in the Boston area in the late 19th and early 20th century.