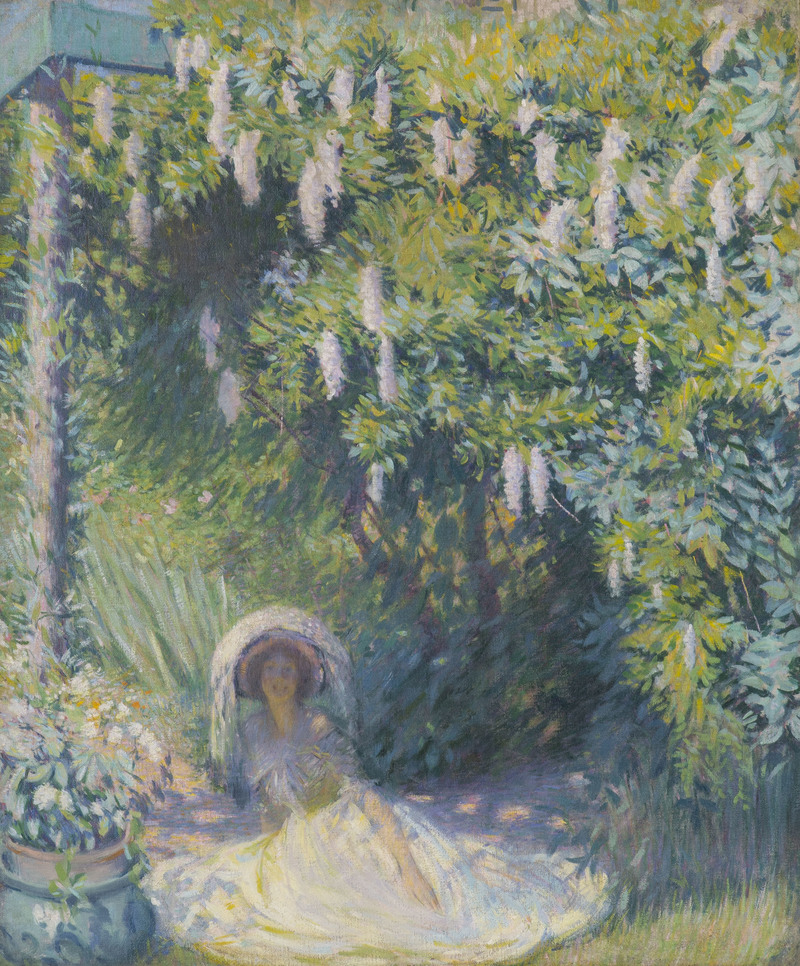 Hale’s work will pose a difficult problem for the museum or collector who wishes to own a representative work of the artist…and this exhibition is the first, and perhaps the last, opportunity to view all of the facets of a monstrously good American painter’s work.

Born into a Boston Brahmin family that included such ancestors as Harriet Beecher Stowe, author of Uncle Tom’s Cabin, Philip Hale was surprisingly encouraged to pursue the fine arts. Prior to enrolling at the Museum School, however, Hale’s father insisted that his son pass the entrance exams at Harvard, as each of a long line of Hale men had done before him. Philip passed with flying colors and enrolled at the Museum School in 1883, where he became one of the first students of the young assistant teacher Edmund Tarbell. Hale’s other instructors would include J. Alden Weir and Kenyon Cox at the Art Students League in New York (1884), and Lefebre and Boulanger at the Académie Julian in Paris (1887).

During his time abroad, Hale joined the artist colony in Giverny, where his work was impacted by the French Impressionists for the first time. The leadership of Monet and the lifestyle of en plein air painting drew him back to Giverny each summer between 1891 and 1893, and Hale’s style had been transformed by the time he accepted a position at the Museum School the next fall. His new works were more experimental as he attempted to loosely define forms not through fine draftsmanship, but through the transient qualities of light and color. In 1898 Hale began teaching summer classes at Matunuck, Rhode Island, and also painted extensively during these summers. He captured his female students in these works: portraits of beautiful young girls in sheer white dresses, resplendent with golden light. These untraditional pieces met with mixed reviews in his gallery exhibitions, with critics describing the work of his 1899 one-man show at Durand-Ruel Galleries as ranging from courageously modern to crudely impressionist.  It was interestingly around the time of Hale’s marriage in 1902 that he seemed to rein his style back in toward the conservative trends of his fellow Boston painters. He depicted elegant women in interiors, athletes at sport, formal portraits and even scenes of allegory, all with a greater attention to form and line, and with a more controlled and academic approach than before seen in his work.

Hale would go on to teach art history at Boston University, lecture at the Boston and Metropolitan museums, and give studio classes at the Pennsylvania Academy. Over his career, he wrote a myriad of critical reviews for Boston papers, and in 1913 published the first American text on the much admired Dutch artist Jan Vermeer. He was a founding member of the Guild of Boston Artists, and also belonged to the Boston Art Club, the St. Botolph Club and the Philadelphia Art Club. He first exhibited at Vose Galleries in 1924, and has since then been commemorated in two major exhibitions at Vose, in 1966 and 1988.