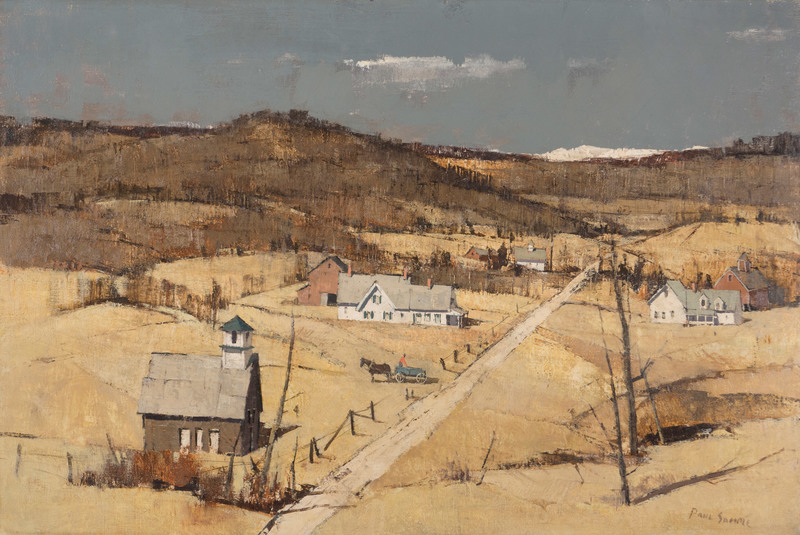 Paul Sample was never a starving artist. His success came quickly, as soon as he chose art as a career at age 30.  Born in Louisville, Kentucky, the son of a construction engineer, Sample grew up mostly in the mid-west.  In 1916 he left home for Dartmouth College, where he reportedly slept through his art appreciation course, focusing his attention on football, boxing and playing the saxophone.  However, his collegiate career was interrupted by a stint in the Navy at the end of World War I, and soon after graduation he contracted tuberculosis.

During rehabilitation in the Adirondacks, Sample was inspired to study art.  He enrolled at the Otis Art Institute under Jonas Lie, and his art career was launched.  Sample went to California, taught painting at UCLA in the winter and painted in Maine and Vermont in the summer.  During this period he developed a unique style of realism, inspired by the humanistic approach of the Dutch master Breugel. He was soon recognized for his mastery of capturing the American spirit and landscape.

The National Academy awarded Sample prizes in 1931 and 1932, and by 1934 Sample had held his first one-man show in New York.  Numerous medals followed, including the prestigious Temple Gold Medal at the Pennsylvania Academy of the Fine Arts in 1935, for his painting Miners Resting.  Soon, major collectors and art museums were buying up his work.

In 1938, Sample was appointed Artist-in-Residence at his alma mater, Dartmouth College.  He settled with his wife and young son in Norwich, Vermont, and maintained a studio across the Connecticut River in the college town of Hanover, New Hampshire.

Art students regularly sought Sample’s advice and guidance.  In his spare time, Sample enjoyed the outdoors, including fishing, riding and skiing in the New Hampshire hills, as well as painting trips to distant destinations from Nova Scotia to Spain.  During World War II, Sample took several leaves of absence to serve in the Navy as an artist-correspondent for Life magazine.

After the War, and until his retirement in 1962, Sample continued at Dartmouth and produced many New England landscapes, as well as commissions for murals, portraits and illustrative advertisements. Critics praised his keen sense of balance in composition, his sympathetic interest in the form and psychology of his fellow man, and his ability to capture the “American scene.”

Following the success of a show of Sample’s watercolors in 1940, Vose Galleries exhibited a cross section of his oil paintings in 1941, including his ever popular landscapes, portraits and genre paintings.