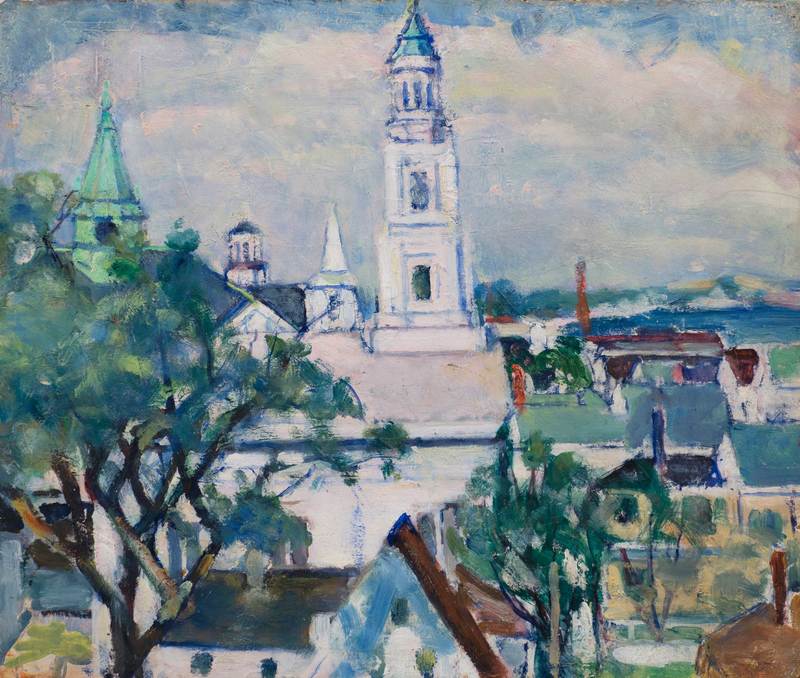 A native of Philadelphia, Nancy Maybin Ferguson spent nearly two decades devoted to her artistic studies, beginning with her enrollment at the Philadelphia School of Design for Women in the 1890s under Elliott Daingerfield, whose instruction she later credited as having a significant impact on her work: “I think due to Mr. Daingerfield’s influence in Composition class, the Old Masters became a thing apart, to be looked on with awe and reverence, especially the primitive religious ones...Mr. Daingerfield taught the method of glazing and I found to my surprise, I could copy with some degree of accuracy.”[1]

Ferguson spent several summers working with Charles Hawthorne in Provincetown before eventually purchasing her own home and thereafter dividing her time between Massachusetts and Philadelphia. She was enchanted by the tiny fishing community at the tip of Cape Cod and found much to inspire her among its winding roads, charming clapboard houses and throngs of summertime visitors: “I liked to paint the streets, crowded with people, happy when carts, automobiles and people did not block my view, and strangers asked no questions. But the solitude and quietness of the dunes from where one could look down at the town and bay below, afforded an opportunity for undisturbed painting of real beauty.”[1] Ferguson’s plein air depictions of Provincetown were admired for their freshness of color and intuitive use of space, particular in the arrangement of houses and other structures within the composition in a somewhat cubist fashion. This quality caused her to be remembered as “a modernist long before the modern movement had taken its hold on American painting.”[2] As the artists’ colony continued to grow, the Provincetown Art Association was founded in 1914 and Ferguson participated in numerous annual exhibitions beginning with the following year’s inaugural show. She also served on exhibition juries and hanging committees in the teens and twenties, and for the next several decades remained an integral member of Provincetown art circles.

Ferguson’s interest in capturing busy streets and other places people congregate continued during the part of the year she spent in Philadelphia, where she painted the city’s parks and scenes of her Germantown neighborhood in a similarly bold fashion. In 1927 she joined the Philadelphia Ten, a women’s artist group founded ten years earlier which focused on bringing members’ work to a wider audience by painting and exhibiting together. This alliance proved necessary and beneficial to their careers at a time when many arts organizations limited enrollment and show space to only male artists. What began as a group of ten expanded to include thirty painters and sculptors during its 28-year run, and the work of Ferguson and her fellow members found enthusiastic audiences as the exhibits traveled among Midwestern and East Coast venues.