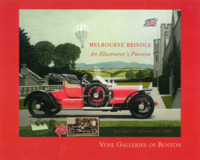 When Melbourne Brindle was living on Marlborough Street in Boston many years ago, he was a regular visitor to the gallery and struck up a friendship with Robert C. Vose, Jr., (1912-1998). Although the gallery did not handle living artists at the time, Robert had great respect for Brindle’s work. Over nearly forty years later, we were prouud to present over thirty works by this very talented illustrator.

The son of an artist and a child prodigy in art, Brindle immigrated with his family from Australia to San Francisco after the World War I Armistice in 1918. Moving to New York, Brindle started his own business, and before long received a roster of commissions from major corporations for his illustrations including Ford Motor Company, General Motors, Chrysler, Packard, Douglas Aircraft, United Airlines and many more. His ads appeared in Fortune, Esquire, Collier’s, and National Geographic, as well as covers for the Saturday Evening Post and the MedicalTimes.  Brindle’s life-long passion for antique automobiles, led to his recognition as the finest car illustrator in the United States.

By the late sixties car companies rarely used illustrations anymore. Brindle retired from his advertising career to devote himself to painting and began a project that would be the highlight of his career. Brindle set out to paint all of the pre-World War I Rolls-Royce Silver Ghosts, widely considered the most beautifully built cars in history. Brindle conducted exhaustive research examining photographs, drawings, magazine articles and other memorabilia relating to the twenty cars he wanted to portray. This eight-year project culminated in the book Twenty Silver Ghosts, which was published by McGraw-Hill in 1971 and quickly became the capstone of his career.

This 1915 Stevens-Duryea was Brindle’s personal car from 1923 to 1932. Built in Chicopee, Massachusetts, it was particularly noted for its smooth ride, thanks to a set of four Westinghouse air springs. Stevens-Duryea invented the three-point support unit power plant with six cylinders, the clutch housing and gear box all in one unit.