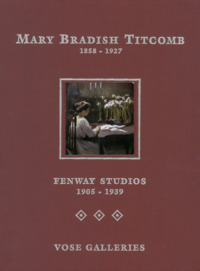 Mary Bradish Titcomb and Her Contemporaries: The Artists of Fenway Studios, 1905-1939

Essay by Nancy A. Jarzombek

Mary Bradish Titcomb came to painting after teaching drawing in Brockton, Massachusetts public schools for seventeen years.  She had received her training as a drawing instructor from the Massachusetts Normal Art School in 1886, and as a member of the Boston Art Students’ Association (now the Copley Society), participated in sketching trips in the White Mountains of New Hampshire and in Ogunquit, Maine, as well as abroad in Amsterdam and France.  At the age of forty-four, she made a decisive move to become a professional artist and moved to Boston to enter the Museum School.  There she studied under Edmund Tarbell, Frank Benson and Philip Hale between the years of 1902 and 1909.

In 1908, after graduating to the advanced painting class and now well on her way to becoming a professional artist, Titcomb moved into the Grundmann Studio building. With neighbors Martha Silsbee, Jean Nutting Oliver, Gertrude Fiske and Marion Louise Pooke, Titcomb was part of a vital community of hard-working, serious-minded women artists that flourished in Boston in the first few decades of the twentieth century. She exhibited widely, both in Boston and nationally, sometimes showing in as many as fifteen venues each year, including the Guild of Boston Artists, the Copley Society, the Museum of Fine Arts, the Boston Athenaeum, the Pennsylvania Academy and the Corcoran Gallery. Between 1917 and 1919, Titcomb exhibited with five other women artists who called themselves “The Group,” while just a few years earlier she joined the National Association of Women Painters and Sculptors (now the National Association of Women Artists), submitting her work to nearly every show from 1914 until her passing in 1927.

When Grundmann Studios was torn down in 1917, Titcomb moved to Fenway Studios where she maintained a studio until the end of her life. In 1920, she bought a house in Marblehead and became a founding member of the Marblehead Art Association. By around 1924, feeling the effects of heart disease, she began to curtail some of her exhibition activity. She died in Marblehead on October 2, 1927.  In 1998, Vose Galleries mounted a major exhibition commemorating Titcomb and her work, entitled Mary Bradish Titcomb and Her Contemporaries: The Artists of the Fenway Studios 1905-1939.