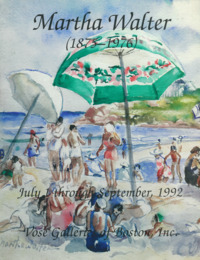 Martha Walter began her training at the Pennsylvania Academy of the Fine Arts under the tutelage of esteemed painter and teacher William Merritt Chase. She also studied with him at his Shinnecock School of Art in 1899 and 1900 where she formed a close relationship with fellow artist Alice Schille. Chase served as a source of encouragement for Walter by urging her to continue to paint and apply for awards, many of which she won including the 1902 Toppan prize. The following year, she was one of four artists awarded the Cresson traveling scholarship which funded two years of study in Europe.  She settled first in Paris and attended classes at the Académie Chaumiere and later the Académie Julian. Though these were some of the best schools in France, she felt restricted by their classical approach, and therefore set up her own studio in the Rue de Bagneaux, where soon many other young American women would join her. Walter focused on painting en plein-air scenes from everyday life which she depicted with a new bold palette of saturated colors. Her affinity for working out-of-doors in sun-drenched surroundings eventually brought her to the shores of St. Malo, Trouville, and Biarritz, resulting in the colorful, impressionist beach scenes that became a familiar theme throughout her career.  Walter remained in Europe for over a decade traveling extensively through France, England, Holland, Italy, Germany, and Spain.

Her work received recognition from the Paris Salon, where she was accepted in 1904, as well as the Salon d’Automne in 1924. In 1922, an exhibition held at the Galeries Georges Petit in Paris inspired a critic to write: “…it is in her smaller, more spontaneous pictures, notably of beach and garden scenes, peopled with brightly dressed crowds, that she is especially striking. Here she achieves veritable tours de force…and is not excelled by any contemporary I can think of in that particular line.” [1] Even while abroad, she continued to exhibit in the United States, at annual exhibitions at the Art Institute of Chicago and the Pennsylvania Academy of the Fine Arts, earning a gold medal in 1923.

At the outbreak of World War One, Walter returned to the United States and took a position teaching in Chicago and later at William Merritt Chase’s New York Art School. It was during this time Walter began exhibiting with the National Academy of Design as she worked on defining her unique approach to painting. She had been known for her scenes of women and children, but soon changed her focus to beach scenes of Coney Island and Atlantic City. Walter also began spending her summers teaching and painting at the popular artist community of Gloucester, Massachusetts, where she had access to locations such as Bass Rocks and Good Harbor Beach. It is in her paintings during this time that she started to incorporate a more Impressionist feel using loose brush strokes, but with a palette of intense colors, reminiscent of the Fauve painters. Walter received support from fellow women artists who also came to Gloucester for the summer including Cecilia Beaux, Jane Peterson, and her longtime friend Alice Schille. They influenced each other’s art, which can particularly be seen in the work of Walter and Schille who spent so much time together. These women also exhibited together several times, including the 1917-18 show, An Exhibition of Paintings by Six American Women, which traveled around the country and included work Mary Cassatt, Jane Peterson and Martha Walter.

By 1940, Walter moved in with her sisters in Melrose Park, Pennsylvania. Her fresh, lyrical compositions continued to attract awards and critical accolades on both sides of the Atlantic. She was featured in one-woman exhibitions at the Cincinnati Art Museum, the Arts Club of Chicago, and Milch Galleries and Hammer Galleries of New York. Her death in 1976 was followed by several exhibitions celebrating her work at the David David Gallery, Arts Club Washington, and Vose Galleries in 1992. A significant contributor to the American Impressionist traditions, her spontaneous works can today been seen at numerous public collections, including the Toledo Museum, the Pennsylvania Academy and the Art Institute of Chicago.