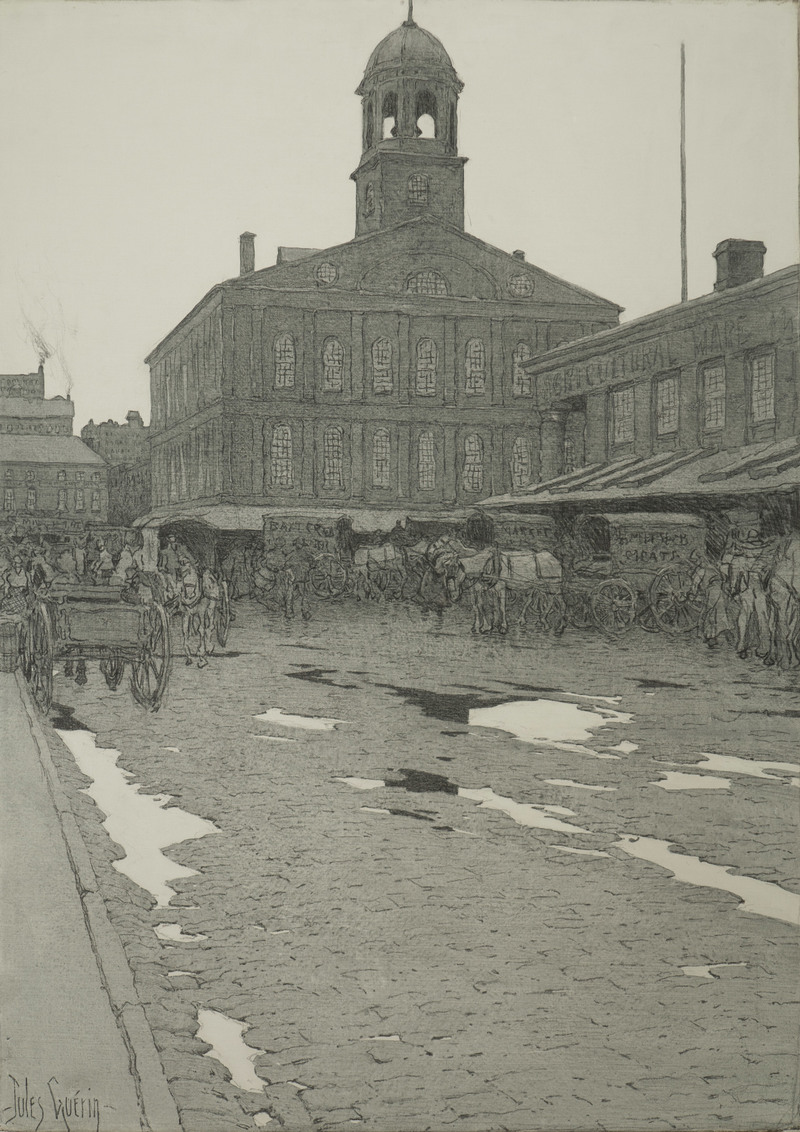 Born in St. Louis, Missouri, in 1866, Jules Guérin became internationally recognized for his detailed yet poetic illustrations of urban subjects, capturing architectural gems from New York to the Middle East. His training in the arts began in Chicago, where he worked as an assistant to a theater scenery painter before eventually traveling abroad and enrolling at the Académie Julian in Paris in 1895. He also explored Holland and one year later exhibited a collection of forty paintings of provincial Dutch life at the Art Institute of Chicago.

By 1900, he had established himself in New York and found work as an illustrator for books and other publications, including The Century Magazine and Scribner’s, thanks to his friendship with Maxfield Parrish. Guérin’s designs reveal Parrish’s influence on him as a colorist, while his early experience as a scenic painter and affinity for exotic locales and allegorical subject matter eventually resulted in commissions for mural work. Today examples of these impressive undertakings can be found in buildings throughout the Unites States, including the Lincoln Memorial in Washington, DC, the Louisiana State Capitol building in Baton Rouge, and the old Federal Reserve Bank of San Francisco.

Many of these mural commissions occurred through Guérin’s involvement with architects and urban planners, an association that began in 1902 when he rendered drawings for Charles F. McKim, famed designer of Boston’s Public Library, for the Senate Parks Commission in Washington, DC. This was soon followed by 1907’s Plan for Chicago, in which he completed bird’s-eye views of Daniel Burnham’s and Edward Bennett’s proposals for the city. In these endeavors and others, Guérin’s work enabled the general public to visualize the architects’ proposals, bringing two-dimensional blueprints to life.

Guérin’s steady work as an architectural delineator, muralist and illustrator kept him very active from the 1910s to the 1930s, and included return trips across the Atlantic for inspiration. He also served as the Director of Color for the 1915 Panama-Pacific Exposition, where he won a gold medal, and became a full National Academician in 1931. In addition to the Art Institute of Chicago, Guérin participated in shows at the Boston Art Club, the Pennsylvania Academy of the Fine Arts and the Corcoran Gallery in Washington, DC, before passing away in 1946.