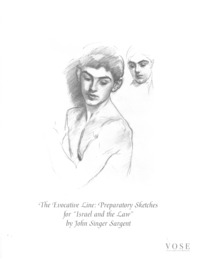 The Evocative Line: Preparatory Sketches for "Israel and the Law"

Prominent portrait painter, muralist and later landscape watercolorist, John Singer Sargent was born in Italy to American parents who had settled in Europe in 1854. He began his art training at the Academy in Florence and from there he enrolled in the Paris Atelier of Carolus-Duran. Sargent’s popularity as a portrait painter originated in London, where he had settled in 1886. As a regular exhibitor at the Royal Academy his reputation as an artist grew and soon reached the United States.

Sargent first visited Boston in 1887 when he painted the portraits of wealthy and notable Boston residents such as Isabella Stewart Gardner. During the next two years Sargent had a solo exhibition at the St. Botolph Club and was commissioned to create a series of murals for the Boston Public Library, a project that would take him until 1919 to complete. While most of his works were completed in England he made frequent trips to the United States and in 1899 a major exhibit of his work was shown at Copley Hall. Over the next twenty years he exhibited at area Galleries including Doll and Richards Gallery in addition to accepting two other mural projects for the Widener Library at Harvard University and the Boston Museum of Fine Arts.