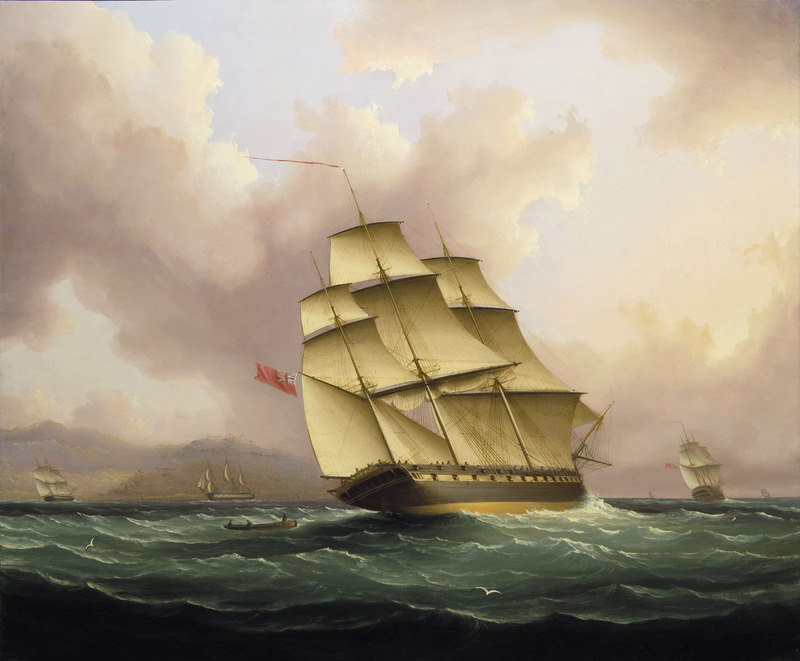 Buttersworth immigrated to the United States sometime between 1845 and 1847, settling in West Hoboken, New Jersey, with his wife and five children. The proximity to New York, then the epicenter for marine commercial transportation, allowed the artist a constant supply of subject matter, and he spent the next four decades recording the transformation of the shipping world, as steam replaced sail, and as recreational yacht racing took hold. He had an innate talent for capturing the movement of a vessel and his style was distinctive; his ships, accurately rendered with exquisite detail, navigate over a generally muted palette of green-blue waters, complemented against warmer tones of gray and yellow in the sky and clouds. Buttersworth exhibited only rarely, submitting paintings to the American Art Union in 1850s, and supported his large family by taking on private commissions which he painted in all sizes. For those who could not afford the originals, his work was made more accessible to a wider audience through the lithography of Nathaniel Currier and later, Currier & Ives.  Whether clippers cresting windblown seas, steamships arriving with their cargo in New York harbor, or yachts smoothly plying the waters, racing for glory, Buttersworth painted his subjects as they would have performed in their natural environment and today examples can be found in several museum collections including the Farnsworth Art Museum in Rockland, Maine, the Peabody Essex Museum in Salem, Massachusetts, and the Butler Institute of American Art in Youngstown, Ohio.