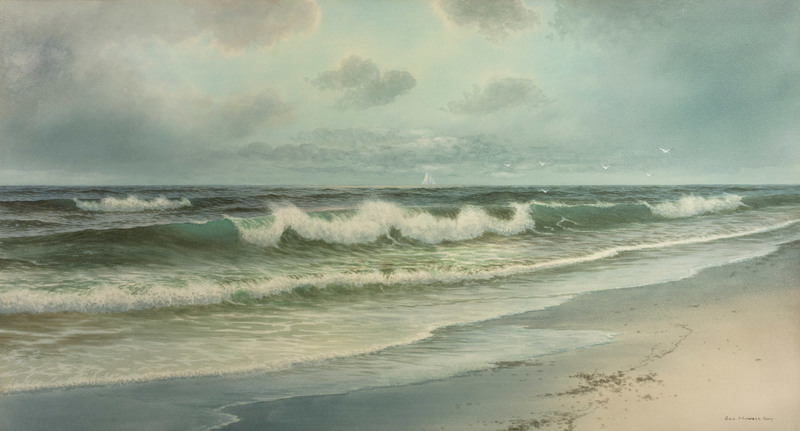 George Howell Gay’s formative years were spent as far away from the ocean as one can get, yet he devoted the greater part of his mature painting career to depicting the pristine shorelines of the Atlantic seaboard from New Jersey to Maine. Born in Milwaukee, Wisconsin, and educated in Chicago under Paul Brown and Henry Elkins, Gay eventually moved to Bronxville, New York, just outside of Manhattan, by 1889. He worked in all media, but was especially adept at watercolor, which allowed him to capture the transparency of churning seas and atmospheric qualities of sunlight and clouds. Gay also found inspiration on the shores of Marblehead, Nahant, and Cape Ann, Massachusetts, as well as Narragansett, Rhode Island, and Monhegan Island, Maine.

Gay’s seascapes were exhibited at the Boston Art Club’s 1890 and 1900 annuals, at the National Academy of Design in 1900 and at the Art Institute of Chicago in 1897. He also showed at smaller venues in Indianapolis and at department store showcases in New York and the Midwest, such as Gimbels, Wanamaker’s and Ayres, which for many decades helped bring many artists’ names to the general public.