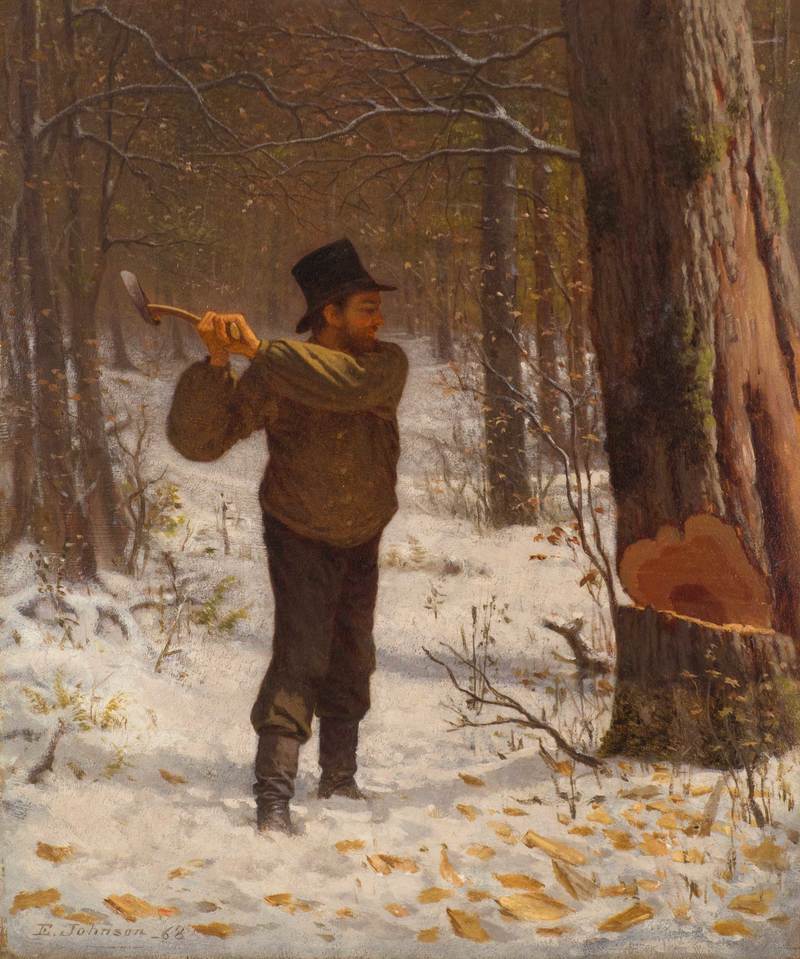 Eastman Johnson stands out among his contemporaries as a leader in the tradition of American genre painting, developing this art form that had emerged in the United States in the early 19th century. Instead of painting the sublime American landscape as were Frederic Church (1826-1900) and Albert Bierstadt (1830-1902), Johnson chose an alternative means of visual patriotism and devoted himself to accurately portraying the rural life that surrounded him. His earliest pieces depicted natives of Augusta, Maine, where Johnson spent his youth, but the course of his career brought him to produce an astounding breadth of work; Johnson became known for presidential portraits to domestic interiors, and from paintings of frontier life to rural life of the North and South.

While genre painting was Eastman Johnson’s field of choice, the artist would both begin and end his career in the more profitable field of portraiture. Johnson’s father was the Secretary of the State of Maine, and his connections with prominent political figures helped Eastman to acquire a plethora of portrait commissions in the 1840s. Extremely gifted for barely twenty years of age, Johnson was permitted to set up a studio in one of the Senate committee rooms in Washington, D.C., where he worked with such sitters as John Quincy Adams and Daniel Webster. News of his skill reached as far north as Boston, and was propaganda enough to persuade Henry Wadsworth Longfellow to join this impressive line of sitters. Ralph Waldo Emerson and Nathaniel Hawthorne were not far behind, yet Johnson interrupted his stream of success in 1849 when he looked abroad for instruction.

Until this point, Johnson had been entirely self-taught, but he set sail for Düsseldorf and the studio of Emanuel Leutze (1816-1868). The school of German genre painting was at its height during this period, and its artists were highly regarded for their technical mastery. It was his time in The Hague (1851-55), however, that had the most influence on his future work, for Johnson discovered the long history of Dutch genre painting, which stretched back to the 17th century. He found inspiration in the masters Rembrandt, de Hooch and Vermeer, and honed his skills through copying their works. Deemed an “American Rembrandt” by his audience, Johnson returned to Washington in 1855 to exhibit his work at the National Academy for the first time. Combining academic European training with American subject matter, he emerged from this period a devoted painter of genre, and celebrated his own country by capturing its people.

Johnson explored the American West upon his return to the United States, focusing on the raw frontier life and the Anishinabe natives of Wisconsin. Rather than executing stereotypical images of the “noble savages,” Johnson recorded their human qualities in a series of factual portraits. He would continue to remain fully devoted to accurately rendering the life around him throughout his career, even constructing a temporary studio on wheels from which to paint. From this mobile standpoint, Johnson spent the sugaring seasons of the early 1860s observing the activities in the maple groves in Fryeburg, Maine. He was broadly lauded for this skill, exhibiting his talent in such remarkable works as The Cranberry Harvesters, of the Timkin Gallery, and Life in the South, of the High Museum of Art.

Norman Hirschl of the Douthitt Gallery described Johnson as “the keystone artist” who bridged the gap between the primitive portraits of Henry Inman (1801-1846) and the artfully rendered figures of Winslow Homer (1836-1910). Hirschl wrote: “Although his subjects were the common property of every artist of his time, he saw them in their broadest sense and treated them with the same creative strength and insight we have grown to associate with Homer, Eakins, the French Impressionists and the Realists.” While decidedly successful during his lifetime, Johnson largely vanished into oblivion after his death in 1906, and it was not until thirty years later that major exhibitions at the Frazier Gallery and Brooklyn Museum bolstered interest in his work.  Today, Johnson has finally achieved the rightful status of one of America’s most celebrated genre painters.