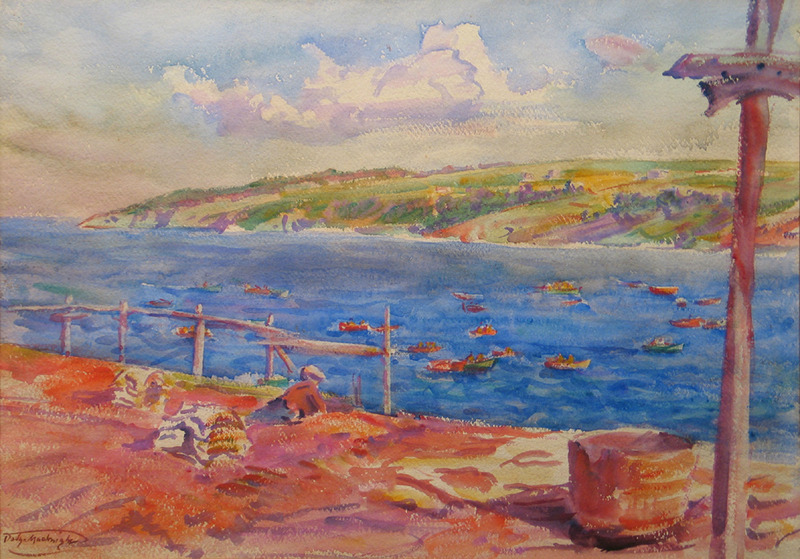 Dodge MacKnight described his style best when he said he strove for “picturesqueness of design with brilliant color.”[1]  Born in Providence, Rhode Island, in 1860, MacKnight worked as a painter of scenery for local theatres until leaving for Paris at the age of 26.  There he pursued the fine arts, studying painting under Fernand Cormon, and befriending Vincent Van Gogh, who invited him to join the artist colony in Arles. Although he did visit Van Gogh briefly in southern France, he declined the invitation to join the colony and instead continued his travels throughout Europe for the next several years.  He returned to America in 1897 with his French wife and son, later settling in East Sandwich, Massachusetts, on Cape Cod.

Despite general bewilderment at his “mad mix of garish colors,”[1] Bostonians admired MacKnight’s work. He was championed by prominent local proponents of modernism including collectors Desmond Fitzgerald, Isabella Stewart Gardner and John T. Spaulding. In 1901, Gardner bought ten of his bold watercolors and installed them in her “MacKnight Room” at Fenway Court, where many are still on display today.  John T. Spaulding became friendly with MacKnight and several of his contemporaries, including Arthur C. Goodwin, Charles Hovey Pepper and George H. Hallowell, welcoming them to his family’s fishing camp near the Cascapedia River in Quebec. Although little fishing was done, the artists discovered a wealth of subject matter in the Canadian wilderness.

MacKnight’s works gained national acclaim, and he exhibited at the Paris Salon from 1885-87 and in John Singer Sargent’s Studio in London, as well as locally at the Pennsylvania Academy of the Fine Arts, the Art Institute of Chicago, and numerous Boston venues.  By the 1920s his annual watercolor exhibitions at Doll and Richards Gallery attracted crowds of visitors and frequently sold out. In addition to the Gardner Museum, his vibrant paintings can now be found in the collections of the Museum of Fine Arts, Boston, the Addison Gallery of American Art, the Cleveland Museum of Art and the Brooklyn Museum.