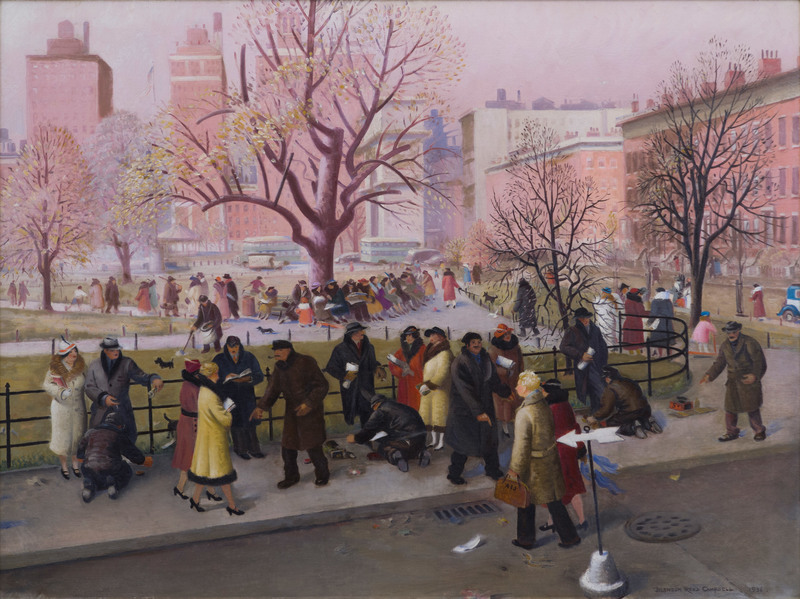 Born in St. Louis, Missouri, Blendon Reed Campbell began his art studies in 1897 under Jean-Paul Laurens and Jean-Joseph Benjamin-Constant at the Académie Julian in Paris, and while abroad also met and studied briefly with James Abbott McNeill Whistler. He participated in the 1899 Paris Exposition, and was awarded a prize the following year during an exhibition sponsored by the American Art Association of Paris.

Upon returning to America, Campbell settled in California and in 1902 helped found the California Society of Artists to combat the traditionalist mindset of the San Francisco Art Association. He eventually moved to New York and found work as a magazine and book illustrator, and joined the Society of Illustrators in 1905. Soon after, he became acquainted with the socialite-sculptor and passionate art patron Gertrude Vanderbilt Whitney when she acquired a studio space near his own in MacDougal Alley. Their friendship blossomed over the ensuing years and in 1918 Campbell became a charter member of the Whitney Studio Club at 147 West 4th Street, where he, his wife and daughter occupied an apartment and studio on the second floor. A precursor to the Whitney Museum of American Art, the Whitney Studio Club offered young artists a place to show their work, socialize, and talk about art with likeminded individuals who may have been snubbed by more conservative venues. Campbell participated in the group’s exhibitions through 1932, and also showed with Macbeth Gallery and the National Academy of Design, as well as annually with the Pennsylvania Academy of the Fine Arts between 1912 and 1936.

Campbell was also impacted by the Depression but coped as many artists did by securing commissions through the Works Progress Administration. A talented printmaker, he used his illustrative skills to create lithographs of everyday American life and many of these are now in museum collections, including Digging Potatoes (1939) in the Metropolitan Museum of Art in New York and Stove Wood (1938) in the Asheville Art Museum in North Carolina. Fittingly, examples of both Campbell’s prints and paintings are also in the collection of the Whitney Museum of American Art.