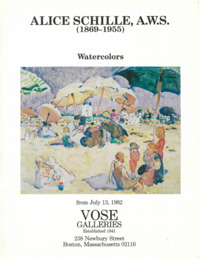 Alice Schille was a master of watercolor. Her fresh, beautifully colored depictions of beaches, villages, gardens, children and city streets earned her over a dozen awards, including top prizes at the Corcoran Gallery, the Pennsylvania Academy of the Fine Arts, and the Panama-Pacific Exposition of 1915. In 1982, Vose Galleries held the first major exhibition of her watercolors for purchase since the teens, a show which served to resurface her incredible work and prompted several other exhibitions throughout the country. In 1986, she was included in The Advent of American Modernism: Post-Impressionism and North American Art, 1900-1918 at the High Museum of Art in Atlanta, Georgia, where her work was featured amongst many other prominent artists who helped bring Modernism to America. Five years later, Keny Galleries in her native Columbus, Ohio, hosted a showing of her work. Prominent art historian William Gerdts wrote the accompanying catalogue, describing Schille as “one of the finest American painters in watercolor of her generation…and certainly the most superb woman specialist of her time.” [1]

The third of six children, Alice Schille was born in Columbus, Ohio, on August 21, 1869. Her father ran a large soda manufacturing company until 1886 when he unexpectedly passed away. It was around this time that Alice was beginning to accept commissions for portraits, and her mother Sophia, as the new head of the household, enthusiastically supported her talent. Soon Alice began attending the Columbus Art School and by 1889 she enrolled at the Art Students League in New York City under Kenyon Cox and William Merritt Chase. Having developed a relationship of encouragement and mutual respect, Chase gave Schille a scholarship to his school at Shinnecock, Long Island, in exchange for some of her paintings. [1] In 1893, she traveled to Philadelphia where she studied at the Pennsylvania Academy, and it was here that she was first introduced to members of the yet to be established group “The Eight”: William Glackens, John Sloan and Robert Henri.

Schille made her first trip to France in 1894 and instantly became part of a large community of expatriate artists including Glackens, Henri, Ernest Lawson and Charles Prendergast. In the evening the group would gather at Chat Blanc in Montparnasse to exchange ideas. Alice had a passion for learning and kept actively involved in the latest developments in the art world as styles evolved from Impressionism to Post-Impressionism to Fauvism, etc. Her work flourished during this six-year stay in Paris as she began incorporate some of these new techniques into her work. She exhibited at the Paris Salon and expanded her knowledge with classes at the Académie Colarossi under Collin, Courtois and Prinet.

Upon returning to the United States, Schille accepted a position teaching watercolor and portraiture at her alma mater, the Columbus Art School, and continued to receive portrait commissions from prominent society members. Her portraits were mostly executed in oil, while she preferred to paint almost exclusively in watercolor for everything else and gained a lot of praise for her unique blend of modern concepts. In 1905, an exhibition held in Columbus was reviewed in the Art Bulletin stating, “Miss Schille’s originality, fine drawing, close attention to detail, as well as management and knowledge of color, with her ideas of the impressionistic school, are such that even a novice in art is held by the unexplainable something which her pictures represent.” [2]  In addition to positive reviews, she was also receiving numerous major awards for her watercolors. She won the Corcoran Prize from the Washington Watercolor Club in 1908, the New York Woman’s Art Club Prize in both 1908 and 1909, and was honored with a Gold Medal at the Panama-Pacific Exposition in 1915. These honors continued throughout her career. In 1929, she received the Fine Arts Prize from the National Association of Women Painters and Sculptors, and in 1932 she won First Prize at the Philadelphia Watercolor Club exhibition.[3]

Schille returned to Europe every year until the outbreak of World War I in 1914, but this hiatus from foreign travel allowed her to apply her maturing style to areas such as New York and Gloucester, and became beneficial for her own work as art historian Gary Wells recognized: “…her imposed break with Europe was actually a catalyst for a more personal response to the meaning of modernism, and it allowed her the time to fully develop a style that expressed her own values, rather than current tastes.”[4]

When WWI came to a close, Schille resumed her travels and expanded her destinations beyond Europe to North Africa and Central America. Ever an observer, she took inspiration from the new styles she encountered, such as Egyptian relief sculptures and Diego Rivera’s powerful murals. Her last trip took place in 1947 at which point she had absorbed and brought back to Columbus some of the most fascinating transitions in the history of art. Today, her work is represented at the Indianapolis Museum of Art, the Columbus Museum of Art in Ohio as well as the El Paso Museum of Art in Texas.