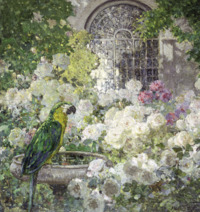 Born into a working-class family in the small town of Weymouth, Massachusetts, Abbott Fuller Graves quit school to work in a greenhouse, tending and arranging flowers, to help support his family.  At around age seventeen, he came to Boston to seek training in fine art, first learning to draw at the Massachusetts Institute of Technology.  At that time, MIT hosted the Lowell Free Course of Instruction, a series of lectures on the arts, and the Lowell School of Practical Design which, in addition to mechanical drawing, included instruction in free-hand drawing from models and casts and from studies of landscape.  The studio classes would have given Graves basic drawing skills; the lectures, intellectual discussions of aesthetics and the fine arts, would have fueled his ambition to become a professional artist, specializing in his grand passion for flowers.  He was only nineteen when his first painting was accepted in the Boston Art Club Annual Exhibition of 1878.  He opened a studio on Tremont Street, taking in students and doing illustrations to pay the rent.

Graves was a congenial, earnest, hard-working young man who believed in the democratic ideal that talent combined with a lot of hard work paved the way to success.  He was ambitious and showed “an independent spirit,” (Robinson in 1888), reportedly removing his painting from a Boston Art Club exhibition rather than have it hung in a poor spot.  Graves was a good friend of Boston painter Edmund C. Tarbell, with whom he stayed during his first trip to Paris in 1884, and became close with Childe Hassam, whom he first met in Boston and traveled with to Paris in 1887, attending classes at the Académie Julian. From 1887 to 1888, they contributed to American Art Illustrated, an ambitious but short-lived publication produced by a triumvirate of influential Boston critics, William Howe Downes, Frank T. Robinson and Lyman H. Weeks. Graves and Hassam were members of the high-spirited Paint and Clay Club of Boston and though both artists ended up in New York, they maintained close Boston ties throughout their careers. In 1891, however, as Hassam was establishing himself as an important American Impressionist painter in New York and Tarbell was earning a reputation as a leading portrait painter and teacher in Boston, Graves followed his own trajectory and moved to Kennebunkport, Maine, away from the limelight of urban life.

Graves’ early paintings were conventional still lifes of cut flowers arranged in a vase or artfully strewn onto a tabletop. By 1905, after an extended stay in France and now fully immersed in the techniques of Impressionism, he moved his canvases outside to paint whole gardens bathed in sunlight. At home in Maine, his interest in flower gardens dovetailed with his interests in Colonial architecture and Colonial Revivalist gardens. He chose accomplished gardens to paint, often including the owner of the garden as well, and as his reputation took hold he was commissioned by many to paint their gardens as a record of the transient for posterity.  In the 1913 catalogue for Vose Galleries’ first exhibition of Graves’ work, the writer Booth Tarkington notes: “When you look at one of Graves’ gardens you think you have seen that garden somewhere; and you have, because it is a garden you have dreamed about. His canvasses are friendly and familiar and wistful; and there is a bit of a dream in each of them – something of moonlight stolen into sunshine. Flowers are the easiest thing to paint – badly. But Abbott Graves has made himself the master painter of flowers.” [1]

In the early 1920s, Graves’ career flourished.  The National Academy of Design elected him an Associate Member in 1926 and while maintaining studios in New York City and Kennebunkport, Maine, Graves began showing at Ainslee’s, Macbeth and Babcock Galleries, and continued to show regularly with Vose Galleries. Graves passed away in Kennebunkport in July of 1936.