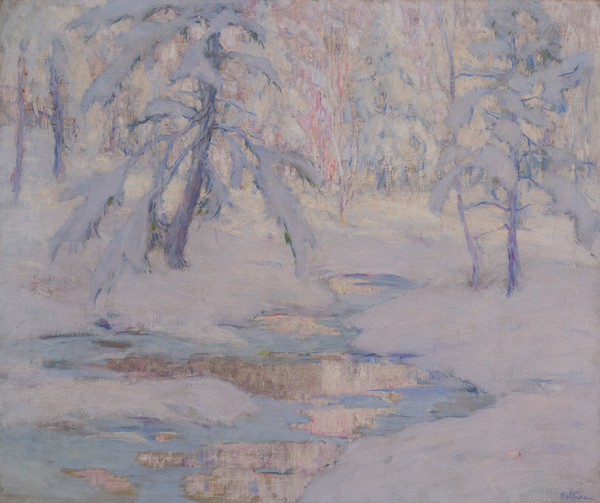 For centuries, composers like Wolfgang Amadeus Mozart and Claude Debussy have employed musical articulations to enliven their compositions. Commonly these scores include contrasted passages of staccato (short and detached notes) with legato (smooth, connected notes) that result in dynamic and engaging arrangements.

At the turn of the twentieth century, American artists embraced the modern style of Impressionism, which originated in France during the 1870s and became popular for its novel brushstrokes. Many American Impressionists, such as John J. Enneking (1841-1916) and Walter Griffin (1861-1935), employed short and broken brushstrokes that parallel the nature of staccato musical notes, while others like Charles Woodbury (1864-1940) and Walter Farndon (1876-1964) harnessed broad and smooth strokes that are reminiscent of legato. Some of their other peers, including leading Impressionists Theodore Wendel (1857-1932) and Jane Peterson (1876-1965), incorporated both stylistic articulations into their work, contrasting sections of staccato and legato to create dynamic compositions just as their musical counterparts did.