Despite attaining noteworthy accomplishments and experiencing continued success well into the 1920s, Gretchen Rogers gave up her space at Fenway Studios in 1932 and did not produce any known work after that time. The cause of her withdrawal from the art world has been attributed to the effects of the Great Depression on the art market and the strain it caused on the careers of many painters. The result of her early retirement means examples of Rogers’ work, most especially figural examples, rarely come on the market today. Five O’ Clock was exhibited at the Pennsylvania Academy in early 1911, where it was purchased by fellow Boston painter Philip Little, and later that year shown at the Art Institute of Chicago’s 24th Annual Exhibition of Oil Paintings and Sculpture by Contemporary American Artists. A black and white photograph from the latter exhibit shows Five O’ Clock on view at the Art Institute.

Edmund Tarbell’s respect for Rogers’ talent was reciprocated by her own appreciation for the work of her mentor and for the guidance he offered during her years under his tutelage. She owned at least one painting of Tarbell’s, a 1905 work called The Golden Crescent (present location unknown), and may have owned, or at least borrowed for a time, a painting called Young Lady with a Hat (last in the DeJong Collection, Chicago; present location unknown), which was a clear inspiration for Rogers’ exquisite figural piece, Five O’ Clock. Tarbell’s model in Young Lady with a Hat has been identified as Katherine Finn, another of his students at the Museum School, and Rogers likely asked her to pose Five O' Clock and used the same blue dress and distinctive fruit embellished hat. Whereas Tarbell has the woman holding the hat in her hand, Rogers sets it atop her head, leaving only the lower part of her face visible and creating an intriguing play of light and shadow along her profile and on the round forms of the fruit. The arms in both paintings are similarly positioned, with Rogers replacing the hat with a delicate teacup in her model’s hands, hinting at the refreshments served at the time denoted in the painting’s title. 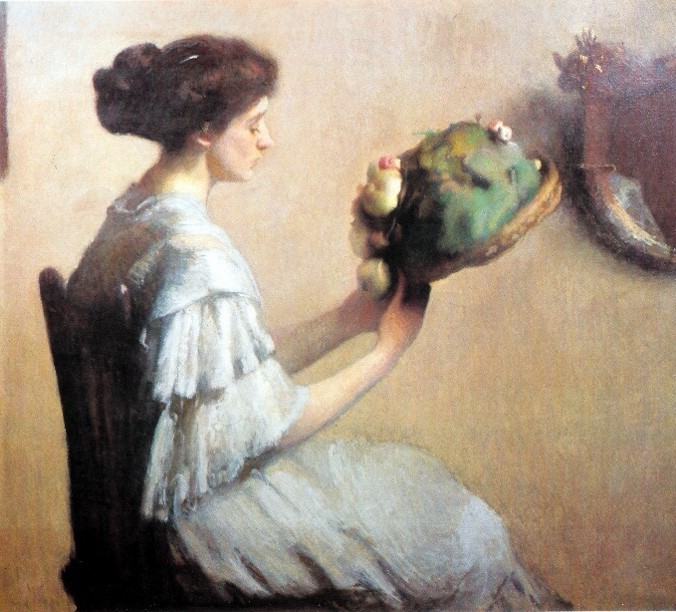 Eventually to the estate of the above, and thence by purchase to private collection, Chicago, Illinois

By purchase to private collection, Santa Barbara, California, 1984 to present

Circa 1910
Price upon request
Contact Vose about this painting