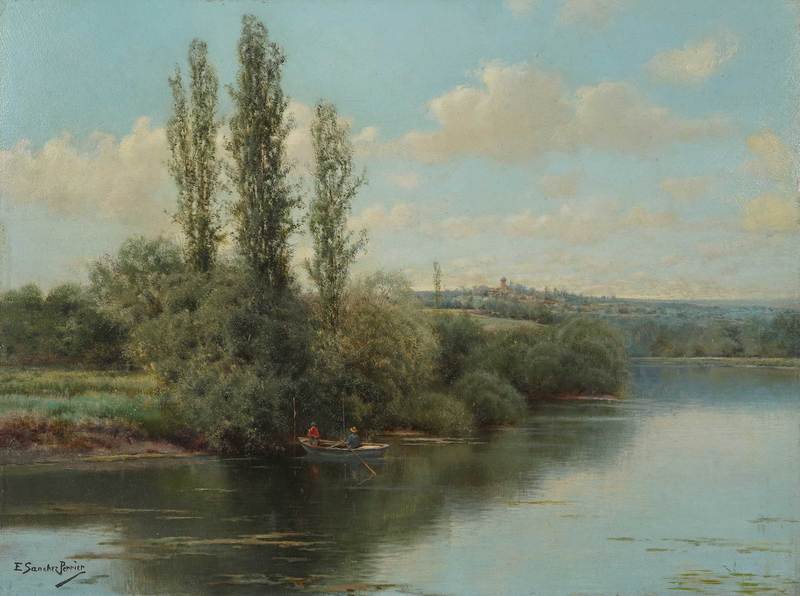 Born in Seville, Spain, in 1855, Emilio Sánchez-Perrier began his foray into the arts at a relatively young age by enrolling at the Real Academia de Bellas Artes de Santa Isabel de Hungría when he was in his early teens. Several years later, he entered the Real Academia de Bellas Artes in Madrid and studied under Carlos de Haes, whose Spanish-Belgian roots and personal experience with the wider art world informed his teaching. Haes led his students on painting excursions throughout the country, instructing them in the technique of working en plein air in a range of settings, while also inspiring them to observe the details of the scenery before them. During this time, Sánchez-Perrier often returned to the Seville area and specifically to a village just southeast of town called Alcalá de Guadaira, where he encountered the plein air landscapes of Manuel Ussel de Guimbarda y Malibrán. This combination of influences, along with his friendships with painters Martin Rico y Ortega and Marià Fortuny i Marsal, would serve Sánchez-Perrier well as he launched his career by the mid-1870s.

After taking part in exhibitions in Seville and Cadiz in 1877, and showing a small group of paintings in Madrid one year later, Sánchez-Perrier resolved to expand his horizons by moving to Paris. There he worked in the ateliers of Jean-Léon Gérôme and Félix Ziem, and joined a close-knit circle of expatriate Spanish artists, including fellow Sevillan Luis Jiménez Aranda, with whom he shared a studio on the rue Boissonade. They remained lifelong friends even after Jiménez Aranda left Paris for the northwestern suburb of Pontoise. In the spring of 1880, Sánchez-Perrier made his debut at the Paris Salon, where he showed three paintings to favorable reviews, and continued to show there annually, winning an honorable mention in 1886. He often traveled during this very active period, finding inspiration in Venice in 1885 and in Morocco in 1887, and among the charming villages dotting the countryside of northern France. He also made return trips to Alcalá de Guadaira and explored sites around Granada. Wherever Sánchez-Perrier found himself, there were views aplenty for the artist’s distinctive soft coloring and sense of atmosphere, rendered with careful brushwork and an eye for detail.

From the late 1880s through the 1890s, Sánchez-Perrier’s star continued to climb. He was awarded the prestigious silver medal at the Exposition Universelle in Paris in 1889, and achieved membership in the Société Générale des Beaux-Arts in 1894, while both European and American collectors eagerly acquired his idyllic imagery of the Continent’s more rustic environs. Around this time, his visits to southern Spain grew more frequent and he became the de facto founder of an active artists’ colony at Alcalá de Guadaira. Surprisingly, while his name and legacy were firmly established and he was painting at the peak of his ability and talent, the circumstances regarding his death in 1907, just shy of his fifty-second birthday, remain a mystery to current day biographers. Today his work can be found in museum collections on two continents, including the Akron Art Museum in Ohio, the Heckscher Museum of Art in Huntington, New York, the Carmen Thyssen Museum in Malaga, Spain and the Camille Pissarro Museum in Pontoise, France.