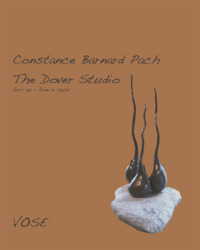 Connie Pach traces her interest in sculpture to her very early exposure to the “clay room” at her progressive elementary school on Brooklyn. Each day after school, she could choose to work in clay or pewter, fashion wood objects in the woodshop or explore drawing and painting. She was “always making something,” which would eventually translate into a career of working with three-dimensional objects.

Although trained as an educator, Connie succumbed to her artistic calling in 1960 and began taking formal art courses in Illinois. When the family moved to Dedham, Connie began private study with Peter Abate, then head of the sculpture department at the School of the Museum of Fine Arts, Boston. Over the next ten years she would produce sculpture in her Dedham studio and bring it to Abate for criticism, and thereafter she began selling her work at local craft stored. She and her late husband, Pete, moved to Dover, Massachusetts, where they built her a studio in 1974.

Connie Pach’s work is shown in the New England and New York areas, and is represented in private collections in Canada, Japan, and the United States.  She has been commissioned to create a variety of work for both public and private institutions, including a large wall sculpture for the Cox Cancer Center at Massachusetts General Hospital in Boston, Massachusetts; two life-size figures for the Avon Old Farms School in Avon, Connecticut and a private home in Dover, Massachusetts; two trophy figures for the Harvard-Yale-Princeton women’s track team competition, and the Oxford-Cambridge, Harvard-Yale biannual hammer throw meet. Pach is associated with the Copley Society of Boston, the New England Sculptors Association, and formerly with the Cambridge Art Association of Cambridge, Massachusetts. She has been invited to participate in special exhibitions at the Isabella Stewart Gardner Museum and the Museum of Fine Arts in Boston, and had a solo exhibition at Vose Galleries in the spring of 2007.